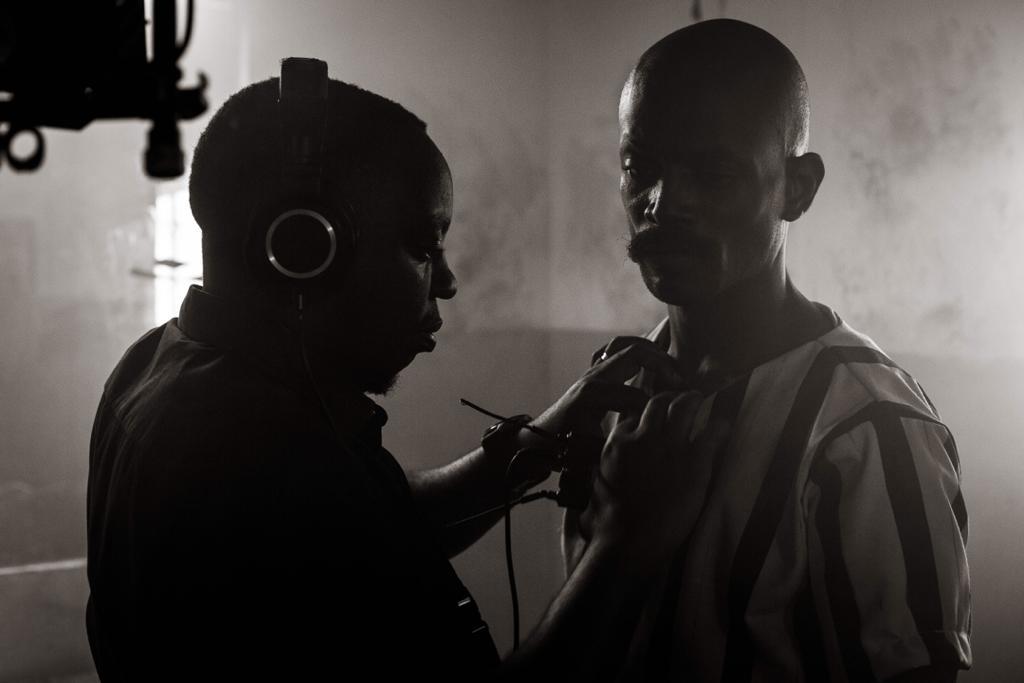 There are many segments when it comes to Audio Production. the first is Music Production the others Audio Engineering. An audio engineer will handle the mic placement, what kind of mics and equipment should be used, the acoustics and treatment of the room, the signal and dynamics processors like EQ, compression, etc, and also the mixing console. You’ll notice that nearly all of these are related to the actual recording of the sounds.

One of the last steps before a film, television episode or advertisement is released to the public is assembling its soundtrack, a word which, in the industry sense, refers not just to music but to every piece of synchronized audio, including dialogue and effects. This task falls to the re-recording mixer, who takes previously recorded and edited audio elements—the work of production sound teams, dialogue editors, foley artists, sound effects editors, composers, music editors, and music supervisors—and layers them together, balancing the levels so that the sound tells a clear and effective story.

The best re-recording mixers excel in balancing audio so that it enhances the work’s storytelling without distracting from it.

In many ways, re-recording mixers are the final gatekeepers through which all audio must pass in the film, television, and advertising postproduction cycle. Working in two phases—an initial sound mix and a final mix after the material has been shown to test audiences—re-recording mixers attempt to fix any final audio problems that may have slipped under the radar. They cover up any environmental noise, cross-fade between different tracks, apply reverb and other filters and adjust varying audio levels, all in the pursuit of a seamless audio experience.

While re-recording mixers do their fair share of technical damage control, their most important job is to ensure that the story is told effectively through sound. This means that every piece of audio is in the right place, demanding the right amount of attention from the audience, and supporting the aesthetic direction of the project as a whole. Taking into account feedback from the director, producers, supervising sound editor, and test audiences, the re-recording mixer must decide when the dialogue should rule the mix, when a plot-relevant sound effect needs to rise above other competing sounds, and when the music should take the lead to drive home an emotionally resonant moment.

In Music Production these are the following steps:

Of all the stages of music production, arranging is perhaps the least understood and most neglected. When a song has a good beat and melody but gets too repetitive after a while, this is usually a problem of arrangement. It’s the arrangement that makes a song interesting.

In very simple terms, the arrangement of a song refers to the selection of instruments playing in each section – how they’re “arranged” – and how the sections themselves are arranged within the larger timeline of the song.

If you’ve written a great verse and chorus, it’s not enough to just play them over and over, one after the other on repeat. There needs to be a buildup of some sort. For example, the 1st verse only has guitar and vocal, the 2nd verse adds the bass and drums, and the 1st chorus adds the synths and vocal harmonies. This is the arrangement of the various instruments within the song.

And just because you introduced an instrument doesn’t mean it should stay there the whole time. Sometimes you only want a certain instrument playing during the pre-chorus, or you’ll bring it in during the second half of the final chorus for climactic impact, or you’ll have a part playing only on the left side for the first half of the verse and then in stereo for the second half. The possibilities are endless. What’s important is to keep things moving. Even subtle additions can add a lot of interest for the listener, whether they realize it or not.

There’s also the question of how many sections to include. I like to judge by feel. You can usually feel when a section has reached its limits, or if you need to change something up to keep people interested. Again, the song should always be moving, even if it’s very subtle. Instruments should come in and out, building in energy, introducing twists and turns along the way. You can also talk about the arrangement at the level of the harmony and what kind of chord voicings you’re using.

Whenever I think about the arrangement, I first try and pick out the one or two elements that are most important to the song and what I want the listener to focus on. Then I listen to the track and ask: What else could I do here to vary it up? Does it need anything else? Sometimes the right answer is to leave it alone. Knowing when to do this is what makes a great producer.

Now we bring the gear in. Since the recording process can refer to many things, we’ll stick to calling this stage “tracking”, and the goal is to capture a performance of the song.

A song exists in the ether. It’s just a collection of musical thoughts. What makes it tangible is a recording of that song at a certain point in time. Playing a song live would make it communicable, but it wouldn’t be tangible as the song would disappear when it’s over. It’s the recording that captures the song in a format that can be listened to continuously at will.

Tracking is the process of recording the various instruments that are used to perform a song. Usually, a song is recorded one track at a time. Every time you record a new track, you hear all the other ones you’ve recorded as well. This is the process of multi-track recording.

Why is it important to think of tracking as a separate process than songwriting? Because songwriting is a different kind of focus than performing. When you’re writing, you want your mind to be free to make all kinds of new associations and connections, so you experiment without any editing. However, when performing a song – for posterity, nonetheless – you need to use your mind to concentrate in a very different way. You need to be focused on playing in time and with the right feeling.

Although you have many editing options for fixing mistakes and helping a performance, there is a limit to what you can do while still having it sound natural, and nothing beats having a superior performance, to begin with. If you try and combine the writing and performing into one process, then typically both suffer. To maximize the impact of your song, it’s best to focus on each one separately.

When you push record, give the performance of your life and think about nothing else. Every time.

The possibilities of digital editing have made capturing a great performance easier than ever. But it’s best to use these tools as a fallback, not a go-to. And when it comes time to do some editing, you should treat this as a separate stage for a couple of reasons.

First, you don’t want to be editing while you’re writing or recording. Focus on those stages separately and give them your full attention so you don’t lose the vibe each time you stop to correct something. Leave the editing to a later stage.

Second, you don’t want to overdo it with editing or your song will begin to sound too “chopped up” and without feeling. By thinking about editing in a secondary way, you’ll make more of an effort to give a solid performance and capture what you need in life, rather than spending twice as long (or more) trying to edit something believable together. When it does come time to edit, treat this as a “do no harm” area. If it sounds good, then it doesn’t need editing. Use this stage to move around parts that aren’t in time, adjust pitches that aren’t quite there, or polish tracks by fading the beginnings and ends of each part so it comes in and out smoothly. The goal of this stage is to get the performance sounding as good as possible, nothing more.

For many, this is where the real fun starts. You’ve written your song, recorded the parts, and now it’s time to sit back, relax, and turn this track into a masterpiece. Knowing how to mix well is an art form that takes years of learning and practice. But that doesn’t stop anybody from doing it, and you should feel free to dive right in and start exploring the possibilities. Mixing is the process of combining all the instruments you’ve recorded into a stereo 2-track mix (left-right or surround if that’s your thing). A good mix will let you hear all the instruments clearly and with detail. It will have depth and motion. It will sound good and support the intention of the music.

Mixing is a world unto its own and many people choose to focus on just this aspect of the music-making process. I like to think of it as being the conductor of an orchestra where you get to decide exactly how everything is going to sound: which instruments will be louder than others, where they will be on the stereo spectrum, which will sound upfront and which will sound far back, what effects will be used and when. The amount of decisions that are made during the mixing process numbers in the thousands, and the final mix has an enormous impact on the way your song will be interpreted. A good mix will help people appreciate your song for the genius that it is.

Mastering has traditionally been treated as its own stage. But for many bedroom producers, it’s simply become the last part of the mixing stage. For most of you reading this, it’s probably the latter, but it’s still helpful to know how it came about. When recording an album, artists sometimes use various studios, producers and engineers for different songs. The result is that each song will have its own sound, sonically. Mastering is the process of making all those songs sound coherent and part of the same album. A good mastering engineer has impeccable ears and equipment and will correct any minor deficiencies in the mix that the mixing engineer might have missed due to the sound of his/her room. He’ll also raise the level of all the tracks so they’re “hot” (loud) and even in volume. By putting each song through the same mastering gear and adjusting to the same level, it makes them sound more like they are coming from the same album.

Since many bedroom musicians and producers record tracks individually without any intention to combine them into a longer album, the role of the mastering engineer is reduced as there is no need to make a collection of songs sound coherent. The function is then boiled down to making the final mix sound accurate – meaning it will translate the sound as intended on different playback systems – and to bring up the level as hot as the artist wants it. So unless there’s a budget for a separate mastering engineer, many people choose to let their mixing engineer take care of this last part, or do it themselves if they’re mixing their own music.